Based on an analysis of all allowed guesses in Wordle, the best starting word is SOARE. Or maybe, using information theory, it’s CRANE. An economist recommends SLICE if you want to minimize the number of guesses, or ADEPT if you want to minimize your odds to fail. I personally start with RATIO, since I get the feeling that the author avoids1 the letter E to keep things interesting. All these big-brain takes raise the question: how much does it really matter?

To investigate, I put together a computer simulation of Wordle (source code here). The first guess can be specified. Each subsequent guess is chosen randomly, taking into account all past clues. Essentially, the computer plays on hard mode2 and always goes with the first compatible guess that pops into its head. By applying that strategy to thousands upon thousands of puzzles, we can get a sense for the importance of a good opening word. 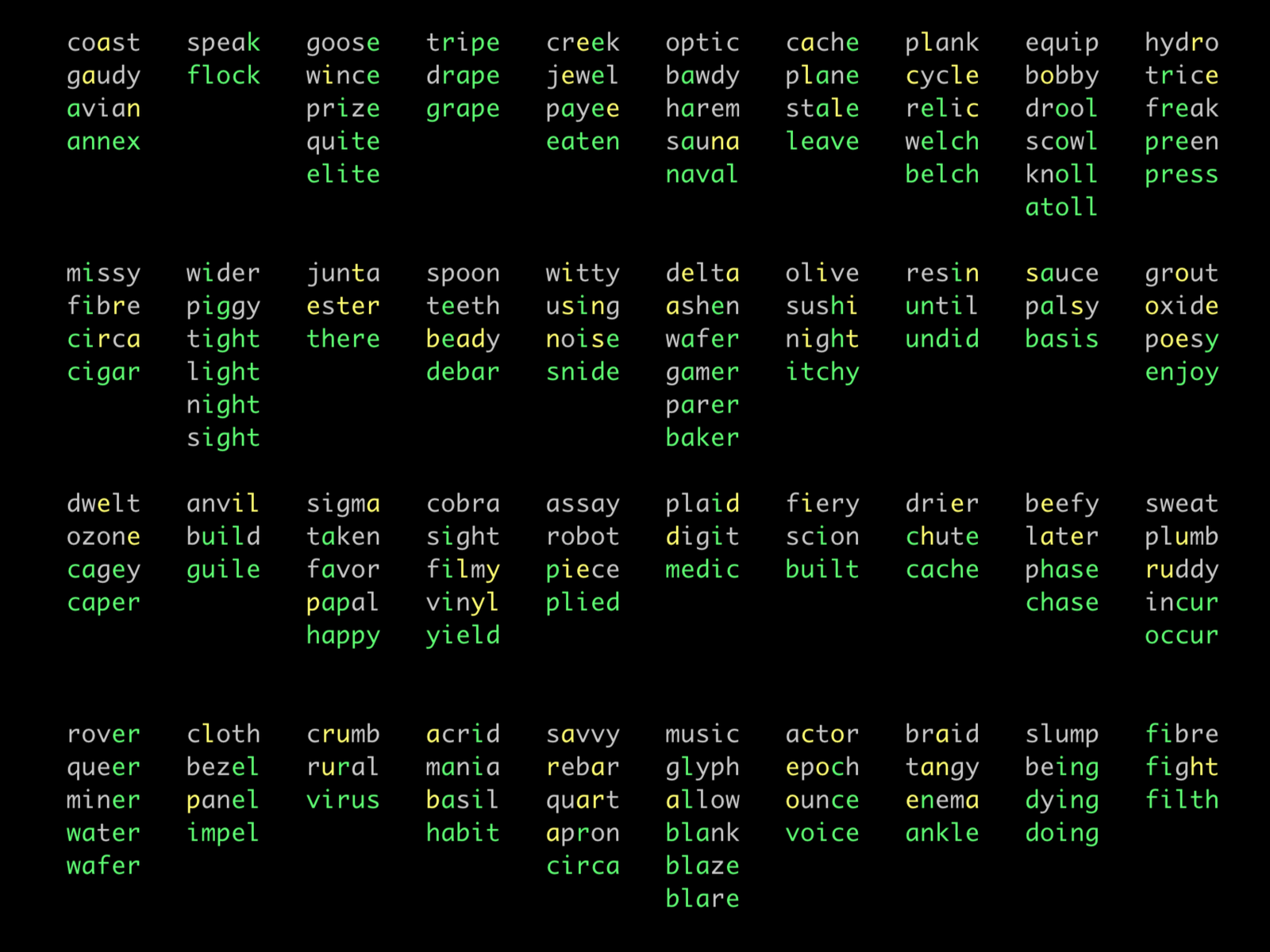 My code can generate and solve about a thousand random Wordle puzzles per minute on my laptop. And, because it uses the solutions list, it’s pretty good about sticking to “real” words.

Before we get into the results, a quick disclaimer. Wordle has two word lists. There’s a list of possible solutions (2,300 words) and a list of allowed guesses (12,900 words). The vast majority of “real” words are in the solutions list, while the non-solution words are mostly nonsense like KYLIX and UMIAQ. In the interest of imitating human play patterns, the model only uses the solutions list. The list of allowed guesses is ignored.

The first column shows the starting word. The second shows the success rate for solving a puzzle with that starting word on hard mode. The third shows the average number of guesses required for successful solutions.

Our win rates have a statistical uncertainty of 0.5% in the table above. That means that ADEPT, CRANE, LYMPH, MOIST, and SLICE are essentially tied for the top spot, while the rest are detectably worse. But keep in mind, these precise numbers come from averaging over century’s worth of puzzles for each word. Percent-level differences won’t be visible week-to-week, or even month-to-month. Even over the course of a year, a 97% win rate will see about3 5-11 losses, compared to 7-13 losses for a 98% win rate. That means it’s very possible for a “better” word to fail more often than a “worse” one, even over a significant period of time.

Guess quality matters more when looking at the average number of guesses. If you start every puzzle with CRANE or SLICE, you should average about 27 guesses per week. You’ll average about 29 guesses per week with LYMPH, and about 31 with FLUFF. After a month, your sample size will probably be large enough to see those differences in your stats (see figure below). 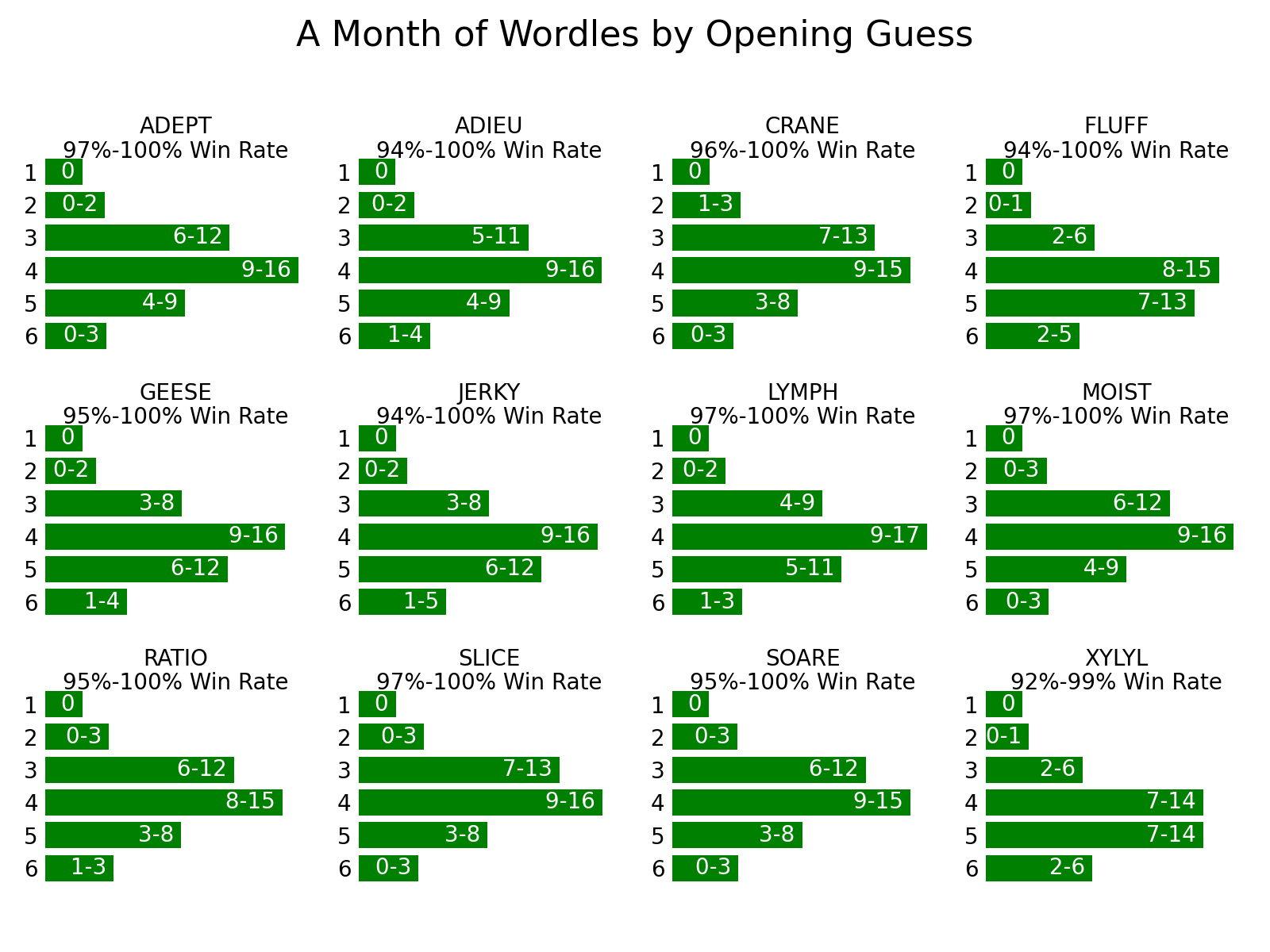 Wordle-style graphs for a variety of opening guesses. Numbers show the expected range of results from a month of daily puzzles.

By simulating thousands of Wordle puzzles, we can precisely compare the strengths of different opening guesses in hard mode. Of the words considered, CRANE and SLICE are the best, both in terms of maximizing average win rate and minimizing the average number of guesses. But with only a single Wordle per day, it takes a long time for those averages to bear out. On any given puzzle, your choice of opening word probably matters a lot less than you expect. Don’t be afraid to start with something WEIRD if the mood strikes you.