In late 2017, Matthias lent me a deck so I could tag along to my first Modern tournament. A few months later, I flew to Spain and broke even against world-class opponents at the Pro Tour. My secret, honestly, was [[Valakut, the Molten Pinnacle:Valakut]]. The deck is resilient and redundant, making it incredibly friendly to beginners. All the cards are basically lands. You keep putting them on the table until your opponent concedes!

The downside of “resilient and redundant” is that the [[Valakut, the Molten Pinnacle:Valakut]] can get repetitive. As I learned the format, I could anticipate my opponents’ tricks and guess their sideboard choices. But you wouldn’t know it from my plays: ramp spell, ramp spell, ramp spell, [[Primeval Titan]]. I eventually got to wondering how the deck could be made more flexible – without losing the consistency that’s key to its success.

Quick on the Draw 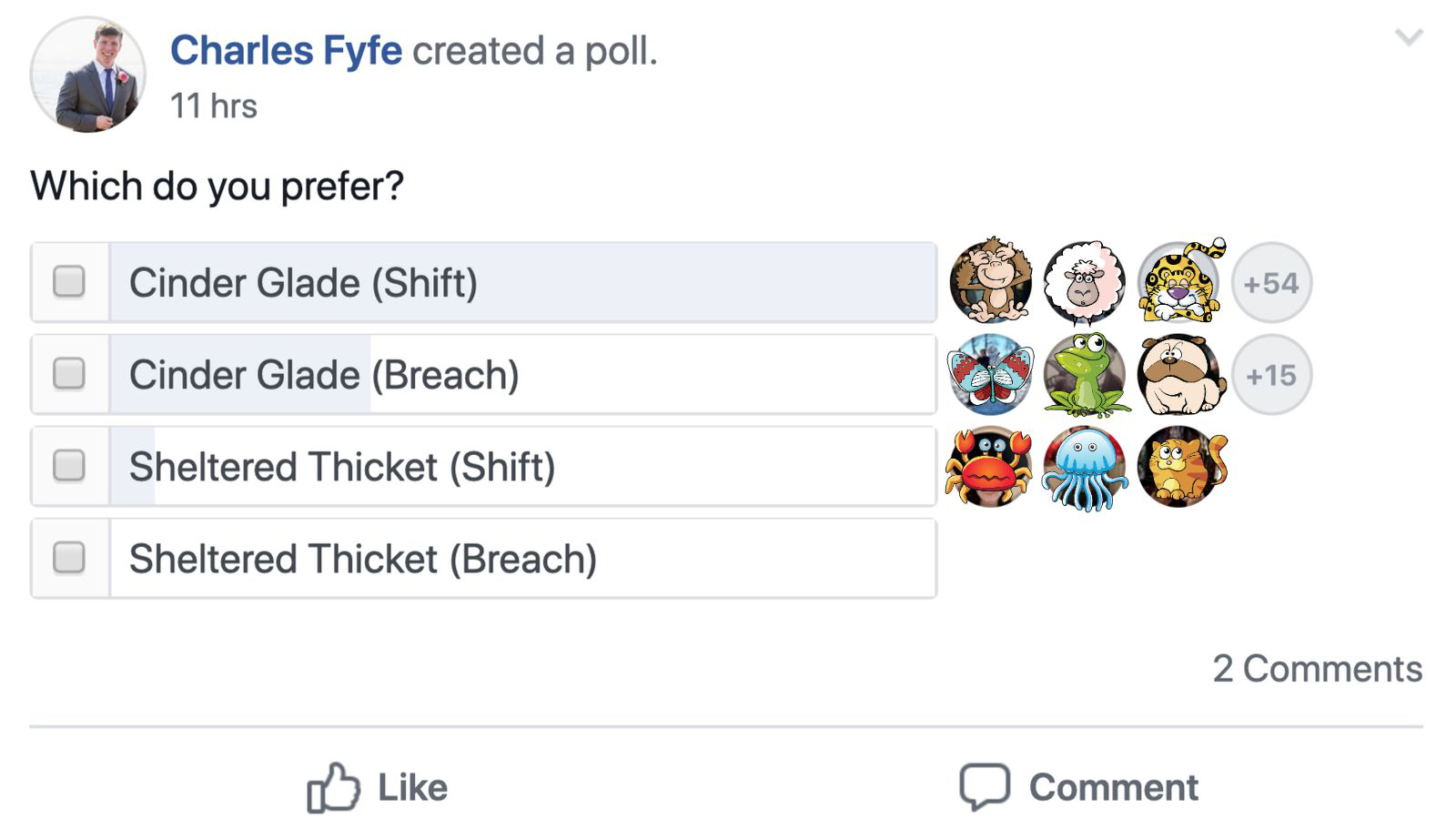 A poll of the Valakut group on Facebook gives a sense for the conventional wisdom. [[Cinder Glade]] is strongly preferred over [[Sheltered Thicket]].

But [[Explore]] and [[Sheltered Thicket]] have three important words that [[Farseek]] and [[Cinder Glade]] don’t: “draw a card.” [[Farseek]] is a fine topdeck if we have [[Valakut, the Molten Pinnacle:Valakut]] online, but in that same situation [[Explore]] gives us another chance to [[Primeval Titan:win]] [[Scapeshift:on]] [[Summoner’s Pact:the]] [[Blighted Woodland:spot]]. And if our opponent has managed to disrupt our plans using [[Cryptic Command:counterspells]], [[Fulminator Mage:land destruction]], and/or [[Blood Moon:lock pieces]], any lands past our sixth might as well be blanks. We’d much rather re-draw in search of a high-impact sideboard card or finisher to turn the game around. The question is, if we want the added flexibility, how does it affect our speed?

This is where the computer comes in. My numerical model1 can read in a deck list, goldfish thousands of games, and tell us exactly how fast that list can expect to land a [[Primeval Titan]] or [[Scapeshift]]. The model doesn’t know anything about sequencing or strategy. Instead, it tries all possible combinations of legal plays and keeps whichever one wins fastest. This approach is computationally inefficient, but it’s guaranteed to find the fastest way to win, even when faced with nontrivial choices.

For example, on turn two, we sometimes have to choose between casting [[Sakura-Tribe Elder:STE]] and [[Explore]]. An experienced player can generally eyeball it, but spelling out the decision explicitly for the computer is tedious and error-prone – a calculation based on how many lands are in our hand, whether we need a second green source, how many live draws we have to make turn-three [[Through the Breach:Breach]] (or [[Simian Spirit Guide:SSG]]-[[Through the Breach:Breach]]), and so on. Instead of all that, we just make two copies of the game. One plays [[Sakura-Tribe Elder:STE]] and the other plays [[Explore]]. If either copy pulls off turn-three [[Through the Breach:Breach]], it’s pretty safe to say a human player could have done the same.

The big caveat is shuffling. The computer is programmed to try all possible options to find the one that wins fastest – including sequencing its plays to shuffle at just the right time to blind-draw into better cards. Essentially, the computer has superhuman “instincts” about the order of the deck. To suppress those non-human play patterns, the order of the deck is locked in as soon as the game begins. There are no mulligans. And any time the computer would search its deck for a [[Forest]], instead it leaves the deck as-is and creates a new [[Forest]] out of thin air. This means no deck thinning, which introduces a percent-level2 uncertainty.

Breach for the Stars

Let’s start with Titan Breach – the deck I played in Spain. The deck uses [[Simian Spirit Guide]] and [[Through the Breach]] to get [[Primeval Titan]] onto the table as quickly as possible, potentially winning the game on turn three. Below is a typical deck list, more or less3. Note that six slots are reserved for interaction: [[Anger of the Gods]], [[Chalice of the Void]], [[Lightning Bolt]], and so on. These cards don’t directly contribute to getting [[Primeval Titan]] on the table, so as far as the simulation is concerned they’re blanks.

We simulate four different variations of this deck to cover all combinations of [[Farseek]] vs [[Explore]] and [[Cinder Glade]] vs [[Sheltered Thicket]]. We also run the same model back using [[Shivan Oasis]]4. This allows us to disentangle the upside of cycling from the downside of always entering the battlefield tapped. The table below shows how the numbers shake out:

T3 is the odds to [[Through the Breach:Breach]] a [[Primeval Titan:Titan]] on turn three, which wins on the spot. T3.5 refers to hard-casting [[Primeval Titan:Titan]] on turn three, which often stabilizes the board right away, but doesn't win until the next turn. Values are cumulative, so "≤T4" is the sum of T3 odds, T3.5 odds, and T4 odds. All values ±1%.

Beyond that, the biggest takeaway is that all the numbers are pretty close together. At most, differences toe the line of statistical significance. For every hand where we lose a turn whiffing with [[Explore]], there’s another where [[Explore]] gains us a turn by drawing us into a missing [[Primeval Titan]] or [[Through the Breach]]. Conventional wisdom suggests [[Farseek]] is better for speed and consistency, but that’s not what we’re seeing.

As long as we’re crunching numbers, let’s spend a moment on [[Simian Spirit Guide]]. Many Titan Breach lists shave a copy, or even cut the card completely, to make room for more interaction. The table below quantifies the effect this has on the deck’s speed.

T3 is the odds to [[Through the Breach:Breach]] a [[Primeval Titan:Titan]] on turn three, which wins on the spot. T3.5 refers to hard-casting [[Primeval Titan:Titan]] on turn three, which often stabilizes the board right away, but doesn't win until the next turn. Values are cumulative, so "≤T4" is the sum of T3 odds, T3.5 odds, and T4 odds. All values ±1%.

Titan Shift is the slow-and-steady [[Valakut, the Molten Pinnacle:Valakut]] deck. Instead of trying to win on turn three, it finds time to disrupts its opponent with [[Anger of the Gods]], [[Relic of Progenitus]], or even [[Mwonvuli Acid-Moss]]. The deck has a fair amount of wiggle room – players often find a place for their pet cards – but the following is a believable baseline:

As with Titan Breach, we simulate all combinations of [[Farseek]] vs [[Explore]] and [[Cinder Glade]] vs [[Sheltered Thicket]]. We also include [[Shivan Oasis]] as a control to disentangle cycling from entering the battlefield untapped. The numbers are below:

T4 is the odds to cast [[Scapeshift]] on turn four, which wins on the spot. T4.5 refers to hard-casting [[Primeval Titan:Titan]] on T4, which often stabilizes the board right away, but doesn't win until the next turn. Values are cumulative, so "≤T5" is the sum of T4 odds, T4.5 odds, and T5 odds. All values ±1%.

As noted up top, the model has superhuman “instincts” about the order of the deck. This means it’s a bit too good when making choices about drawing cards with [[Explore]] or [[Sheltered Thicket]]. Luckily, the effect is small. [[Sheltered Thicket]] goldfishes better than [[Shivan Oasis]] once per fifty-ish hands. Some of that benefit is real, while some is due to bias. That puts the scale of the bias around 1%, comparable to our other uncertainties. We don’t have a direct comparison for [[Explore]], but we’d expect the effect to be even smaller. The computer’s “instincts” only matter when it’s making a choice. [[Sheltered Thicket]] always presents a choice between playing it as a land and cycling it, but [[Explore]] only presents a choice when we have the option to cast something else instead.

Let’s also be clear about the limitations of goldfishing. The model cares only about winning as fast as possible, but in a real game we also need to not lose. [[Cinder Glade]] saves us a few points of life every time we fetch it in place of an untapped [[Stomping Ground]]. [[Farseek]] ensures double-green for [[Obstinate Baloth]] on turn three. [[Explore]] dodges [[Ashiok, Dream Render:Ashiok]]. [[Sheltered Thicket]] grinds nicely with [[Life from the Loam]]. These corner cases cut both ways, and they’re tricky to quantify because the metagame is always changing.

That all said, it’s not looking good for the conventional wisdom. [[Farseek]] is supposed to outperform [[Explore]] in terms of speed and consistency, but it turns out the difference is negligible. Same for [[Cinder Glade]] and [[Sheltered Thicket]]. If a game is going according to plan, neither is particularly better than the other. But recall why we’re making these comparisons in the first place. If things aren’t going according to plan, seeing an extra card increases our exposure to high-impact sideboard cards and finishers to turn the game around. Overall, it looks like [[Explore]] is better than [[Farseek]], and [[Sheltered Thicket]] is better than [[Cinder Glade]], in both Titan Breach and Titan Shift.