In the Pokémon universe, each trainer carries a team of pocket monsters with them at all times. When two trainers make eye contact, they are honor-bound to battle. The battle cannot end until one trainer wins, by knocking the other trainer’s entire team unconscious. The winner earns both money and social status.

This premise is (evidently) compelling. Seven generations of Pokémon handheld games have been released; each has been a top seller. The franchise has also made successful forays into console games, television, movies, trading cards, and mobile apps.

But just because Pokémon is successful doesn’t mean every part of it is perfect, or even good. In particular, the type interaction matrix – the chart that lists the elemental types, as well as their strengths and weaknesses – is a mess:

Rather than a cartoon animal, this pokémon is an inanimate object.

Rather than a cartoon animal, this pokémon is a cartoon person.

Rather than a cartoon animal, this pokémon is ???

As the saying goes, everything should be as simple as possible, but no simpler3. Type interactions add a layer of excitement and skill to Pokémon battling; getting that to work requires a baseline of complexity, and that’s fine. But we’re way above that baseline. The type system is an unwieldy kludge. The large number of interactions poses a steep and unnecessary learning curve for new players.

So let’s try a thought experiment. Suppose we could go back in time and rework the Pokémon type interaction system. How might we simplify it, while preserving the game’s flavor?

First, we’d have fewer types. Per above, Bug, Dragon, Faerie, Fighting, and Steel get cut. Dark, Ghost, and Psychic get consolidated into a single “spooky” type; let’s call it Shadow.

Let’s also fold Ice into Water, Poison into Grass, and Ground into Rock – especially in the first generation of games, these pairs exhibit significant overlap. Water and Grass are favored over Ice and Poison due to the formers’ roles as starting types. Similarly, Rock beats out Ground since Rock is associated with the (awesome) reanimated fossil pokémon.

We can take this opportunity to clean up the lexicon as well. “Flying” is suggestive of anatomy, not elemental powers; let’s rebrand that type as Wind. Electric becomes Lightning. Grass becomes Plant. Normal… it’s easy to show up to battle when you can breathe fire, but how does Rattata get out of bed every morning? An abundance of Heart.

We are left with eight types. An example pokémon is shown below for each:

Under this paradigm, there would perhaps be fewer dual-typed pokémon. Bulbasaur, Pidgey, and Rhyhorn could just be Plant, Wind, and Rock (rather than Grass/Poison, Normal/Flying, and Rock/Ground respectively). But there are still plenty of opportunities for dual typing.

After reworking the types, it’s time to rework their interactions. Rather than choosing them one at a time, and hoping things line up in the end, let’s frame type advantage in terms of a handful of cycles, each in the style of Rock Paper Scissors (or Rock Paper Scissors Lizard Spock).

Judging the interactions one by one, this system looks a lot like the old one – most interactions are intuitive, and a few feel a bit forced for the sake of balance. The differences become evident when we take a step back and look at the system as a whole: 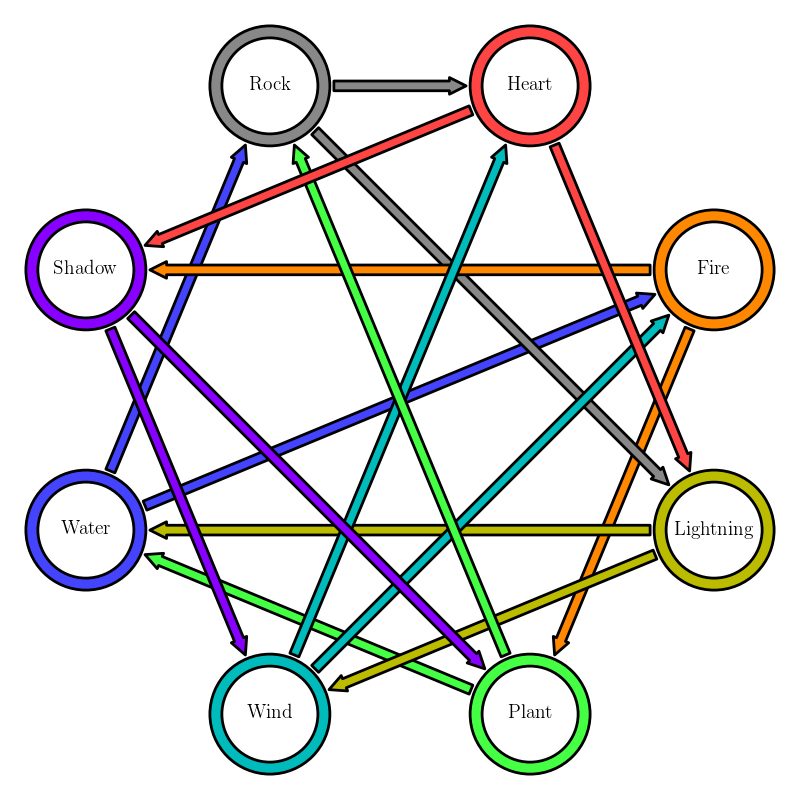 There are two big changes. First, each of the new interactions is symmetrical; Water beats Fire, regardless of which side is attacking4. Second, under the new model, each type has two good matchups and two bad matchups.