If you live in a metropolitan area, you’re probably not far from a farmers market. These markets are a great, budget-friendly way to get some extra vegetables into your diet, as well as to support your local farmers. Stop by the St Paul Farmers Market on a Saturday morning and you’ll see bison steaks, cave-aged cheeses, hand-knitted crafts, and truckloads of fresh-picked fruits and vegetables.

Unlike grocery stores, which ship in produce from Mexico, California, and other regions with year-round growing seasons, farmers markets (typically) source locally. As a result, different kinds of produce are available at different times of year – asparagus and rhubarb in the spring, corn and berries in the summer, squash and apples in the fall.

Seasonal swings in selection can be inconvenient week-to-week, but if you’re willing to put in a little bit of time, these swings can also be an opportunity. As the season winds down, farmers are looking to unload surplus tomatoes, peppers, and more. They sell them by the bucket – five, ten, or even twenty pounds at a time. That’s way more than you could reasonably eat before it spoiled, but by freezing those vegetables, you can have access to them all winter! 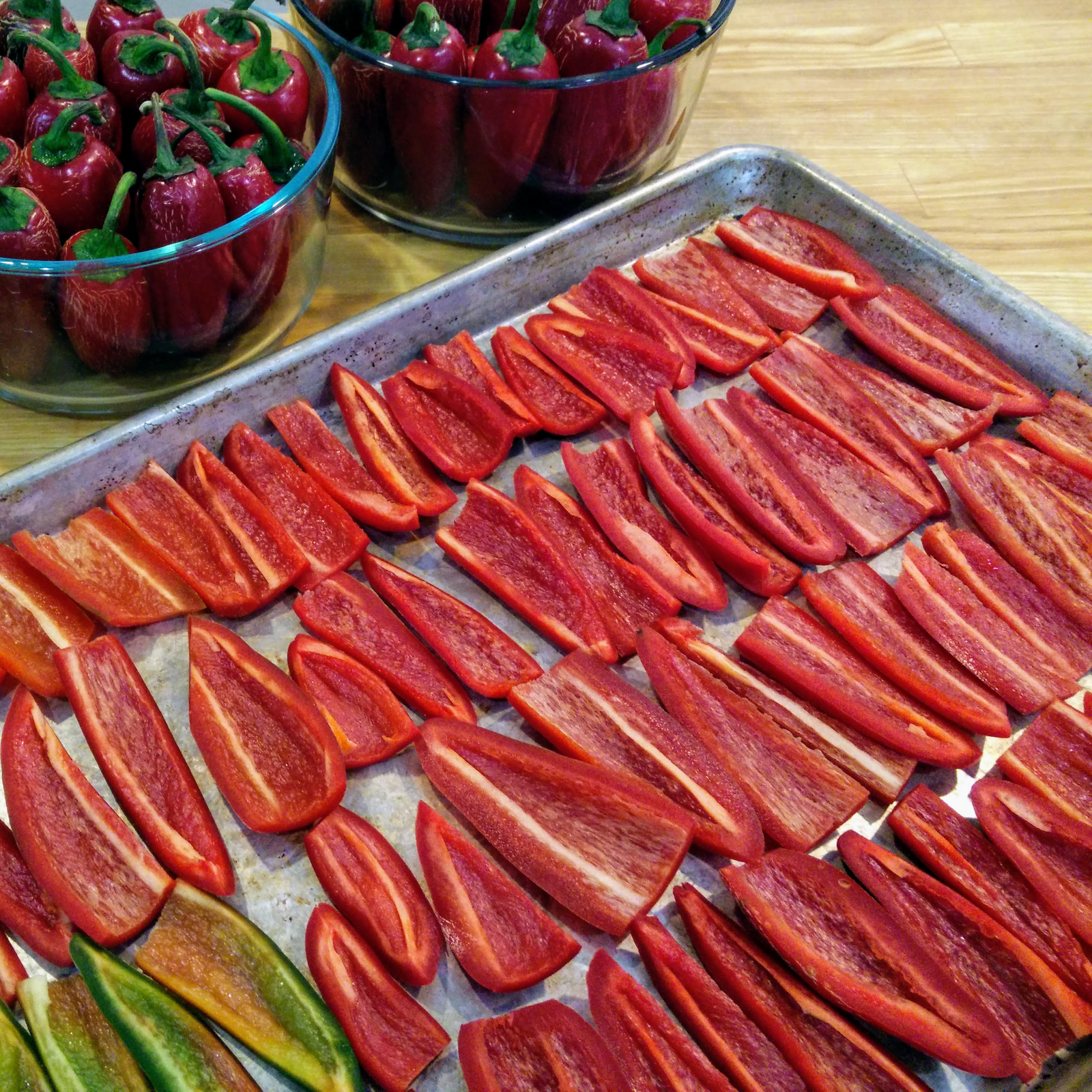 In Minnesota, the farmers market is the only place to find red (ripe) jalapeño peppers. They’re sweeter and less bitter than the green ones. In the dead of winter, they’re perfect for chili or jalapeño-infused tequila.

The eventual goal is to be able to reach into the freezer, grab a handful of whatever you need, and toss it right into your stir-fry, soup, sauce, or smoothie. There are two important steps to making that happen.

First, fruits and vegetables should be rinsed and prepared before freezing. Stumps, skins, and seeds are much easier to remove when the produce is fresh. Anything larger than a strawberry should be halved, sliced, or cubed.

Second, pieces should be individually frozen. Freeze your vegetables on waxed paper or a cookie sheet, then transfer them to a plastic bag. Otherwise, you’ll end up chipping what you need off a single frozen block. When you zip the bag, also be sure to squeeze out as much air as you can, to minimize freezer burn. 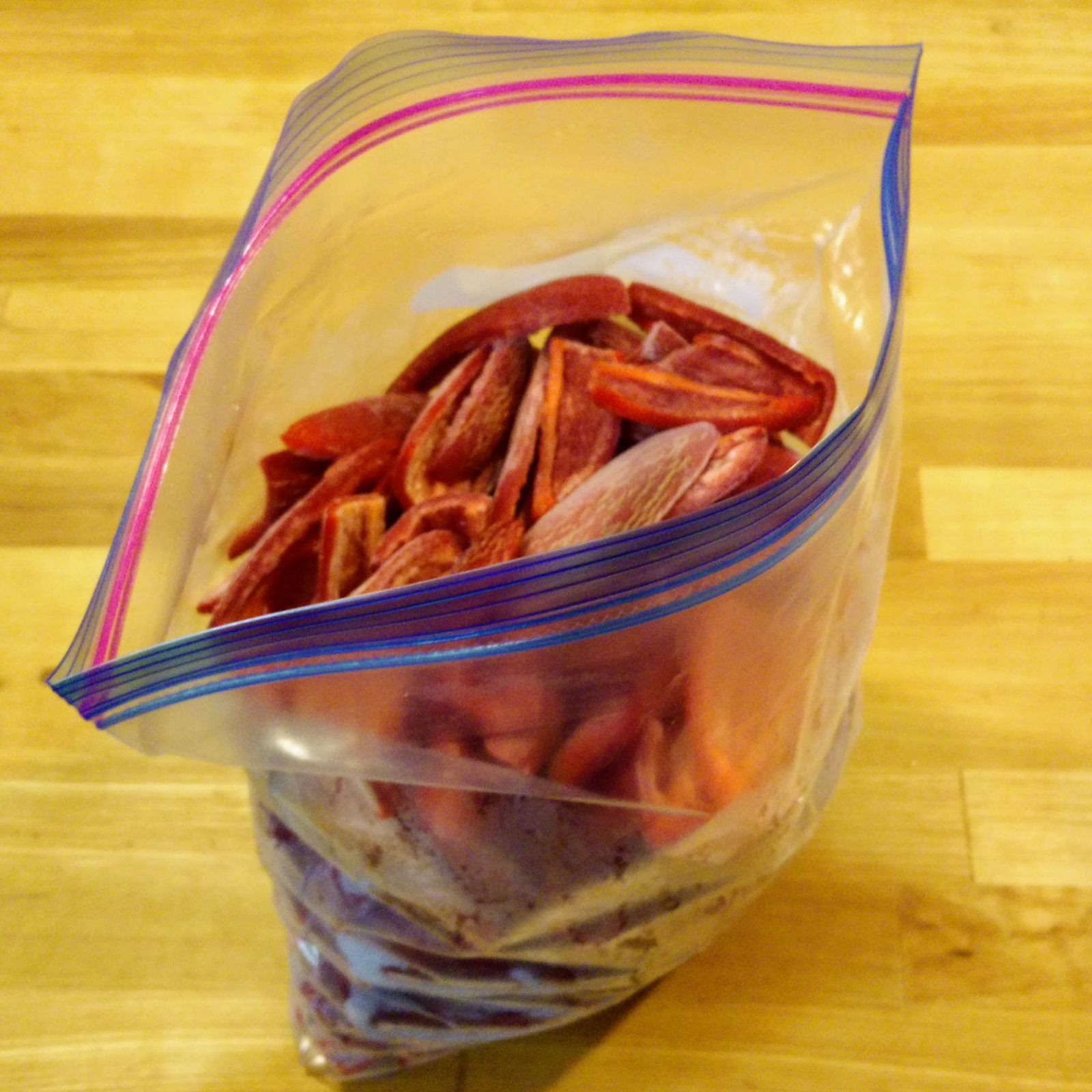 Don’t forget to label your bags! You don’t want to confuse bell peppers with jalapeños.

That’s all you need to know! But if you want to go wild, there is one more step you can take: roast your vegetables before you freeze them. Tomatoes are roasted skin-side down, caramelizing the skin and concentrating the juicy interior. Peppers are roasted skin-side-up until their skins begin to blacken; the blackened skins are then scraped off and discarded. 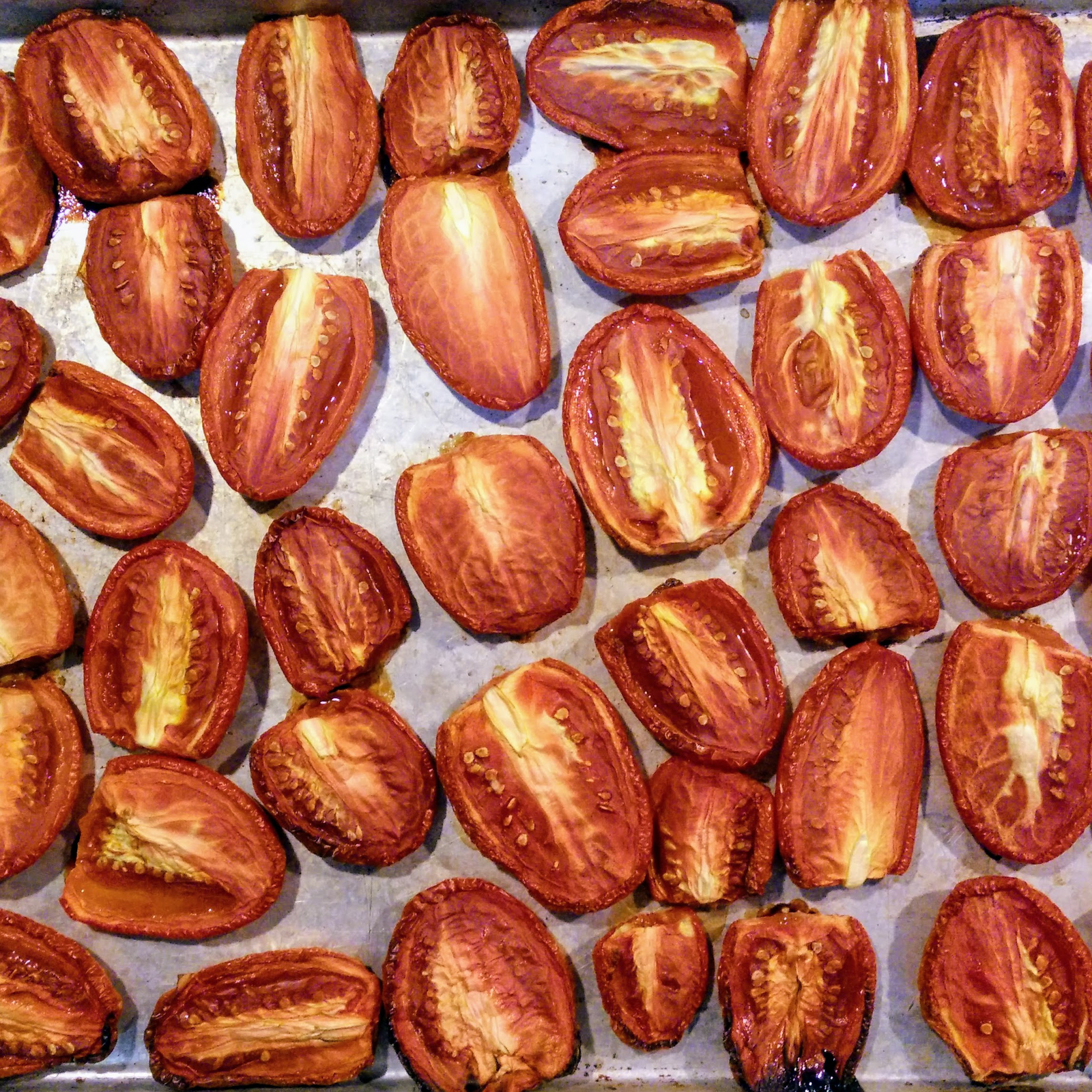 Roasted tomatoes have a stronger flavor than fresh ones. They also take up less room in the freezer.

Roasted vegetables have stronger, smokier flavors than their fresh counterparts, which can be intimidating if you don’t have a recipe that calls for them. Luckily, you do: shakshuka!